How Did Stoney Find The Power To Remove Statues?

Richmond City Council held a special meeting on Wednesday to discuss removing the statues along Monument Avenue. During the meeting, Richmond’s Mayor Levar Stoney requested the governing body of Richmond City to vote on a resolution that would lead to the immediate removal of statues. This request would mean the City of Richmond would be ignoring the 60-day process that was expected after July 1 – which is the first day that localities are able to begin that process to remove statues after the General Assembly voted to give them this power during the 2020 session.

“Madame President, it is time,” said Stoney at the meeting on Wednesday. “Time to put an end to the lost cause – replace the racist symbols of oppression and inequality.”

The City Attorney Haskell Brown stopped the vote from happening due to what he said was a lack of time for his office to review the resolution – saying he received the motion just minutes before the meeting. He also said that this move goes against the counsel he gave last week of sticking to the General Assembly-recommended  60-day process for removal.

However, later in the meeting, Stoney made it clear that he believes that the recent State of Emergency issued by Gov. Ralph Northam in reference to protests in Richmond gives him the power to remove the statues on his own accord. Stoney asked for an extension from Northam to this emergency declaration at the end of June to provide additional funding for law enforcement officials to respond to the protests across the city.

Brown stated during the meeting that he does not believe Mayor Stoney has the power to remove the statues on his own.

The council wrapped up by deciding to reconvene on Thursday afternoon to vote on the resolution. However, not long after the council adjourned, City of Richmond sheriff deputies along with a crane and other equipment surrounded the Stonewall Jackson statue at Monument Avenue and Arthur Ashe Boulevard. 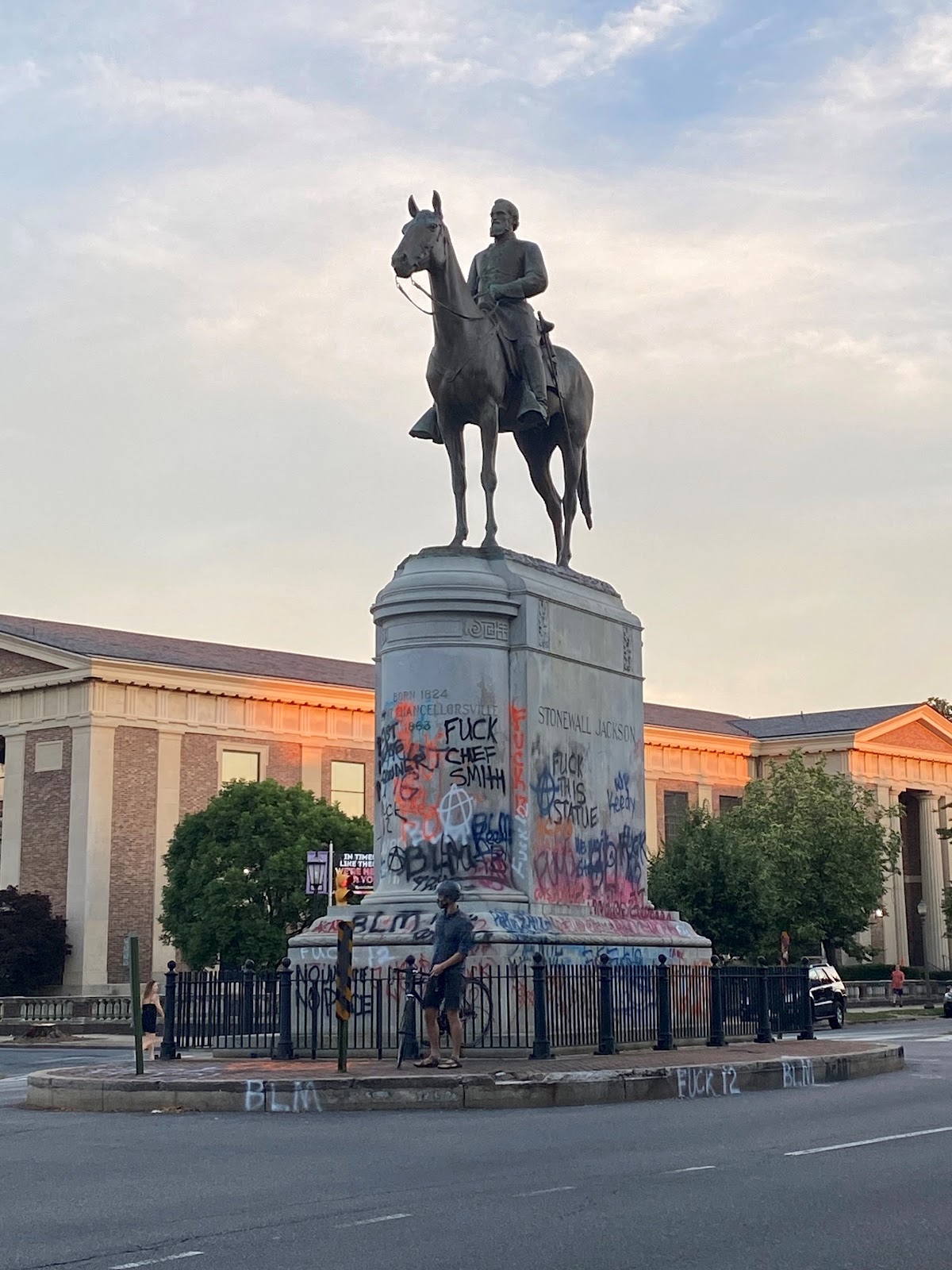 It was clear that the Mayor was moving forward without City Council approval, although all nine members of the body have already publicly expressed their approval of removal.

As crews had been working for more than an hour to prepare the statue for removal Wednesday afternoon, Stoney sent out a video statement citing public safety as his reason to remove the statue.

“Today I ordered the immediate removal of confederate monuments from their pedestals,” said Stoney. “This work, already underway, will continue over the next several days.”

“Failing to remove the statues now poses a severe, immediate, and growing threat to public safety.” said Stoney. “For the last 33-consecutive days, people have been gathering in large numbers in our city. As the COVID-19 pandemic continues to surge, protesters attempt to take down confederate statues themselves or confront others who are also doing so – the risk grows for serious illness, injury, or death.”

Stoney pointed to a sequence of events beginning in 2017 that give him the power at this time to unilaterally remove the statues.

In 2017, the City Council adopted City of Richmond’s four-year Emergency Operations Plan, which declared that the Mayor of the city will be assigned as the Director of Emergency Management. This plan establishes the “legal and organizational basis for emergency and disaster operations in the City of Richmond.”

Stoney then noted that the City Council consenting to his declaration of urgency on May 29 and Gov. Northam’s Executive Order on May 31 declaring a State of Emergency in response to protests as factors that cause him to take actions in his role as Director.

The powers listed are vague, yet immense.

Powers of the Director as listed in the plan:

Stoney says the Code of Virginia in the Richmond Emergency Operations Plan authorizes him to protect the health and safety of persons and property meaning that the July 1st date had no actual relevance in Stoney’s explanation of why he holds the power to remove unilaterally. He cited his powers allowed in matters of public safety, which means he could have made this decision as early as May 31 when Gov. Northam first declared a State of Emergency.

Stoney also noted the moral reasons for removing the statues.

“We have needed to turn this page for decades, and today, we will,” as he spoke from the former Capital of the Confederacy. After more than a month of protests across the city to bring attention to the need for social justice, Stoney said that it is “past time.”

Onlookers surrounded the statue while work crews prepared for hours to remove it. But just a few miles down the road, sheriff deputies and civilians clashed after a protest against the lifting of the eviction ban. Organized by New Virginia Majority, Leaders of the New South, Richmond Tenants Union, Virginia Student Power Network, and Richmond Strike, the crowd gathered for an anti-eviction demonstration on the John Marshall Courthouse steps in the early afternoon. 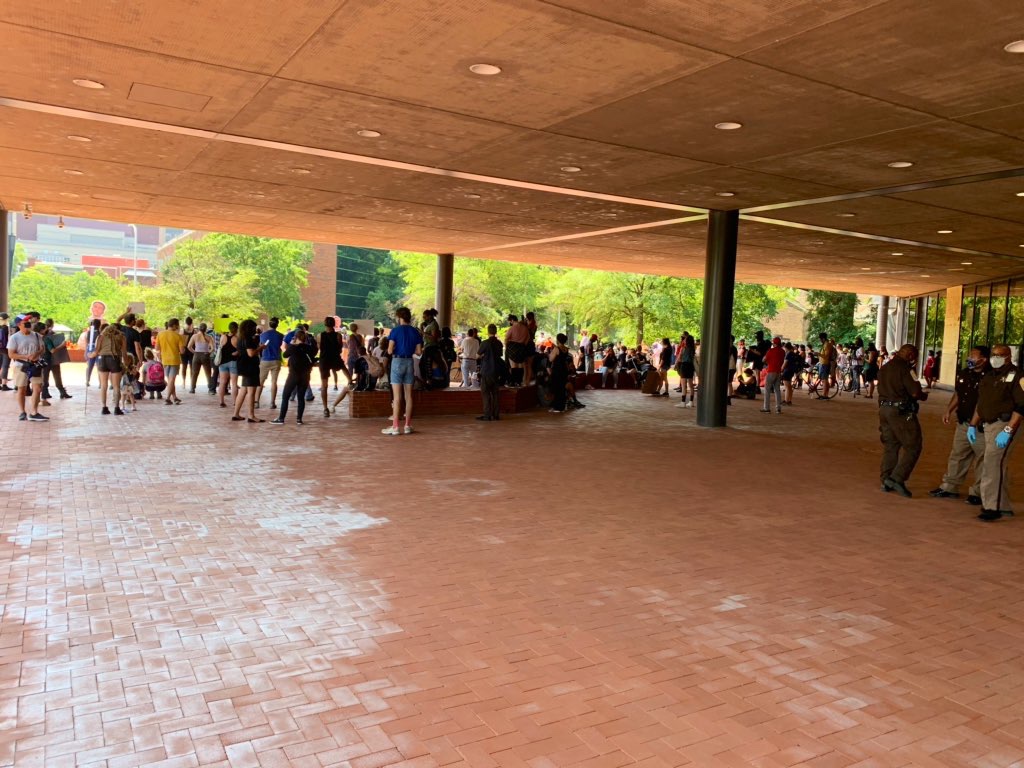 According to the organizers, the purpose of the gathering was to bring attention to the fact that there are over 1,300 eviction cases being held in Richmond during the next two weeks.

Close to 100 people gathered off to the side of the main entrance to the building while half-a-dozen deputies stood near the doors. Protesters spoke to their personal struggles involving evictions and the trauma than the process of losing a home can cause a person.

One protester spoke of the struggle to pay rent, noting that a large portion of her paycheck goes towards rent.

“I make $8.50 an hour and I have to pay $750 month for rent,” she said, before reminding the crowd that rent often rises each year but the minimum wage has not increased since 2009.

The General Assembly raised the minimum wage this year to $9.50 an hour, but that increase has been delayed until May 1, 2021, due to COVID-19’s effect on the economy. 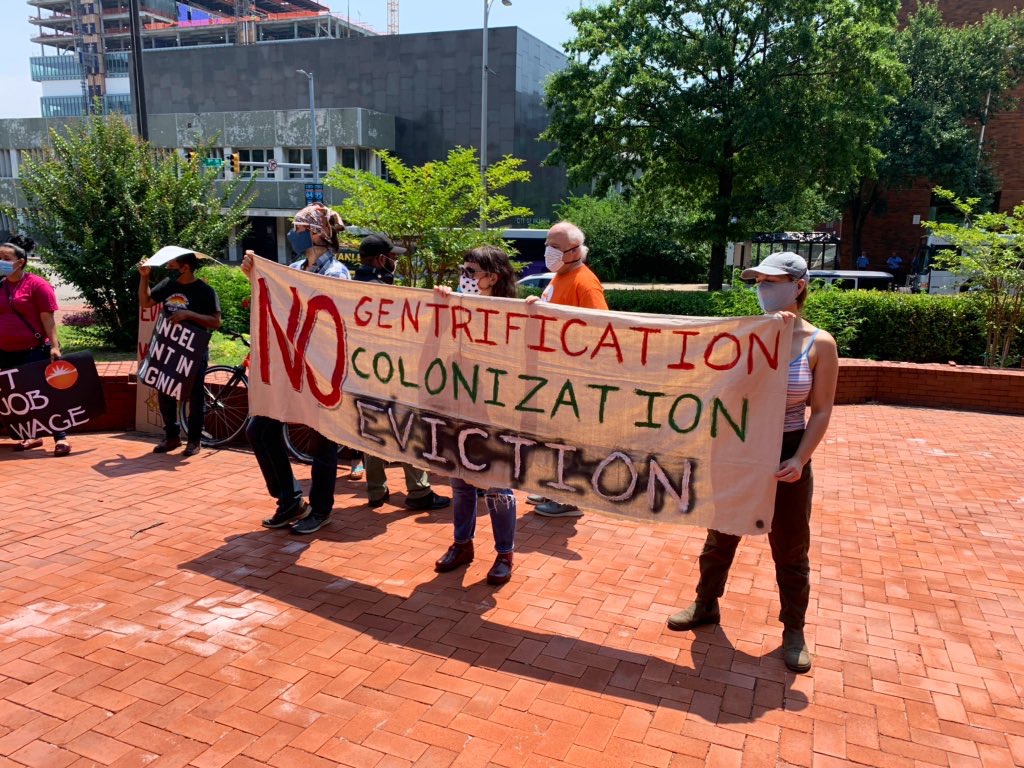 Later in the day as attention shifted to the removal of the Stonewall Jackson statue on Monument Avenue, an incident happened at the front door of the courthouse that resulted in sheriff’s Deputies pepper-spraying citizens. A video posted by Chris Suarez of The Richmond Times-Dispatch shows the encounter happening. Suarez reported that two witnesses told him that the result was a result of someone sitting on the floor in the middle of the entrance.

There is no word on if any charges have been filed against protesters at this time.

Meanwhile, the scene at the Stonewall Jackson monument was in stark contrast to the scenes at the courthouse, where community members gathered en masse by social media and word-of-mouth to cheer on the removal of the confederate symbol. Homeowners opened up their porches to onlookers for shade from the sun and for shelter during the storms later in the afternoon.

Virginia state legislators Ghazala Hashmi and Jennifer McClellan were in attendance as well as City of Richmond Councilpersons Mike Jones and Stephanie Gray, who have been local champions for the removal of the confederate symbols along Monument Avenue.

Sheriff deputies removed a man after he got too close to the monument during its positioning for removal. The man was emotional while waving a flag in support of protecting the confederate monuments and was heckled by protesters who ripped the flag away and burned it in the intersection of Monument Avenue and Arthur Ashe Boulevard.

Dillon Richards was handing out water bottles and picking up trash around the monument when he snagged a piece of the flag as a commemorative piece of today’s event.

The temperature dropped and the energy in the crowd shifted when the afternoon thunderstorm rained on those gathered at the monument. But still, most people stayed to watch as the engineers working sawed away at the hooves of the brass horse and strapped the rest of the statue with tethers and ropes. The workers beckoned the crowd for cheers as drenched onlookers watched the statue rise off of the base of the monument and lowered to the ground, after more than four hours of activity. 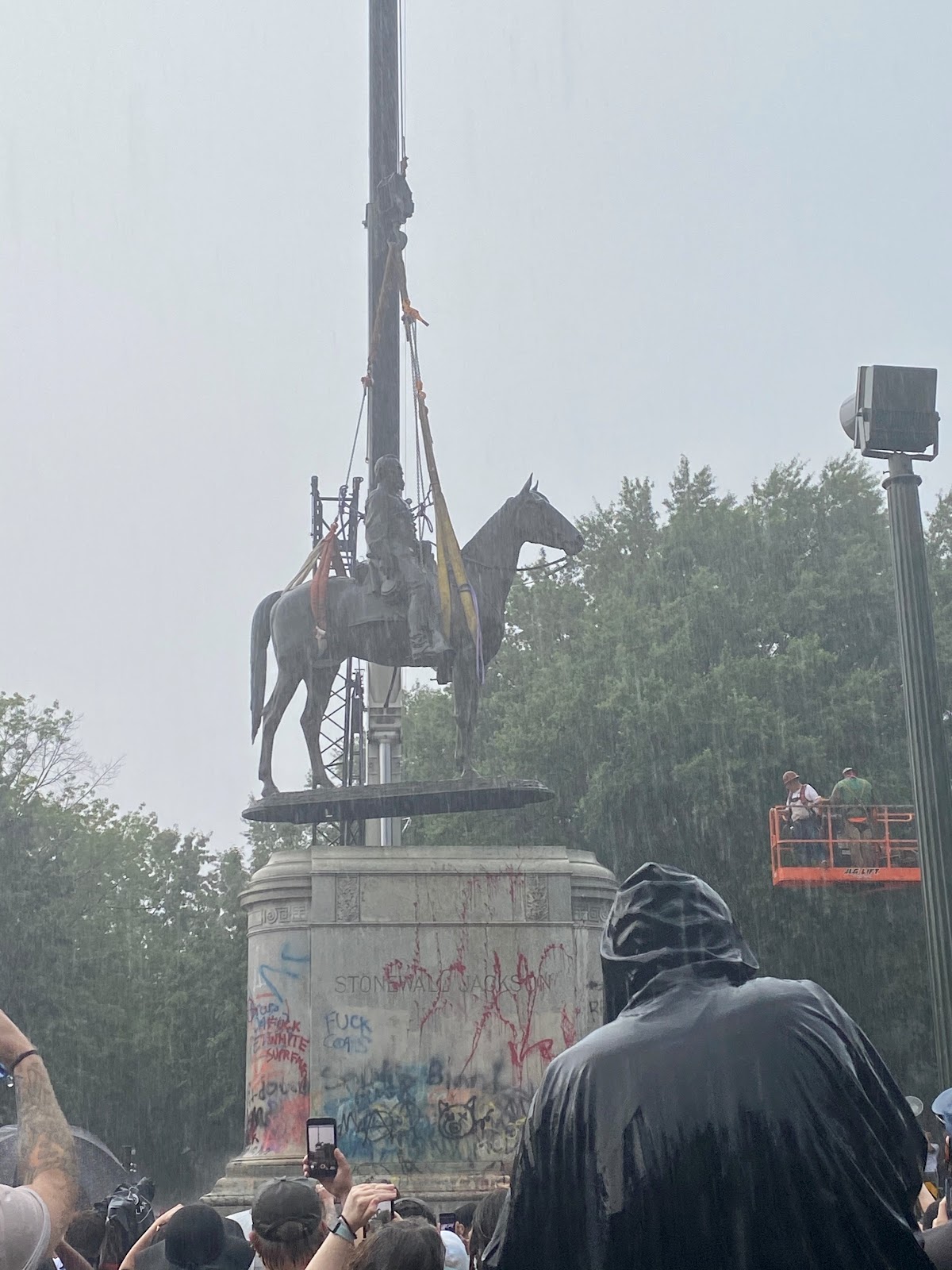 As the statue left the concrete structure where it has resided for a century, it dawned upon onlookers that this was the first step of many needed to find equity and justice in a country that was built on the backbone of racism.

The statue was placed sideways on the bed of a tractor-trailer at the corner of Arthur Ashe Boulevard and Monument Avenue was workers took hours to position the statue with the crane and secure it to the bed of the trailer. 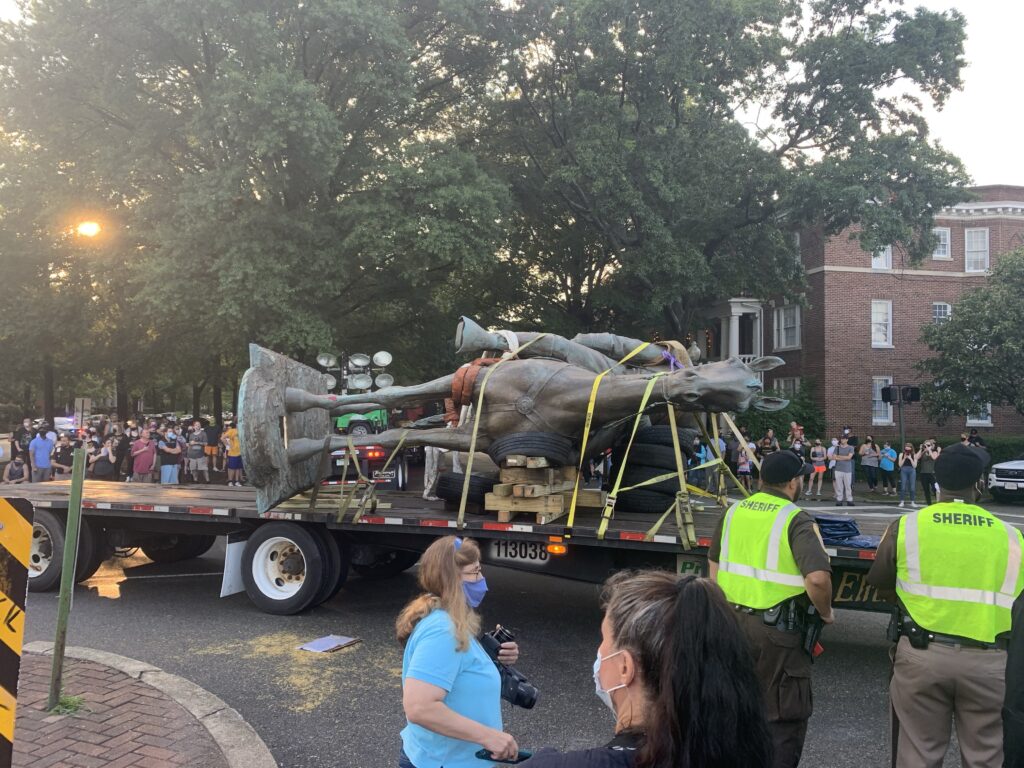 Stoney said on Wednesday that the process to remove statues will take several days, but it is clear now that he plans to use his power as the City’s chief executive during a State of Emergency to remove them.

The statues will be placed in storage until the city decides what to do with them.

Right now freelance journalists and engaged members of the community are ensuring that the facts of these historical times are reported. As our platform searches for and amplifies the truth across Virginia each day, we need help paying these journalists who are on the ground doing the work to report on these events as they happen. They do not receive any corporate sponsorships or a salary with benefits to keep them safe as they relay important information in real-time.

Help us as we help them give a megaphone to the voiceless while holding truth to power. All of the money donated goes directly to reporters and concerned citizens that are on the ground each day giving you the news.

You can pay any amount that you are comfortable spending.

Subscribe monthly on Patreon or you can make a one-time donation through Paypal here. Either way, your money will go a long way in making Virginia more accountable.

In a rare move, Planned Parenthood Advocates of Virginia gets involved in a primary by endorsing Aird

Bill Bolling: “Let’s be clear, a Trump nomination would be a disaster for the Republican Party, but it could happen.”

In a rare move, Planned Parenthood Advocates of Virginia gets involved in a primary by endorsing Aird