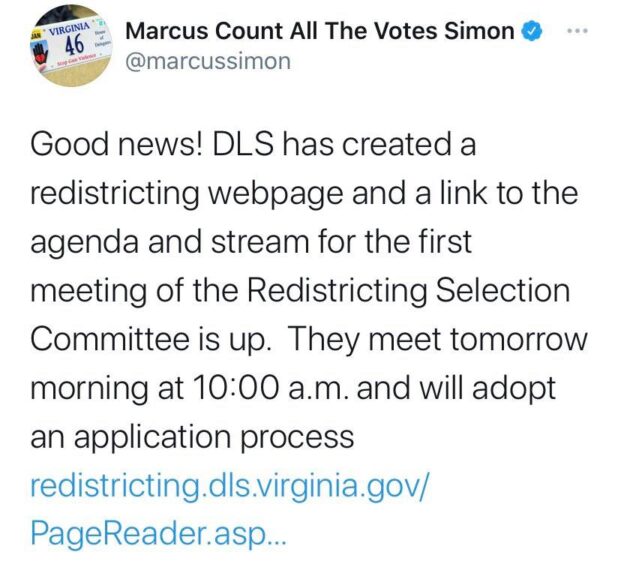 The panel of circuit court judges will be meeting today to finalize an application process for citizens to join the Redistricting Commission. The meeting is taking place at 10 a.m. and you can watch it live here.

ICYMI: We provided a general timeframe for when Virginia’s former Governor Terry McAuliffe will officially announcing his run for the Governor’s mansion again.

Jess Reingold, a web project manager who lives in Alexandria, has lots of ideas for Virginia’s COVIDWISE app, which was the first software system in the nation to alert users if they’ve had a close contact with someone who tested positive for coronavirus.

“There isn’t much to see or do in it unless you’ve tested positive,” she wrote in an email last week. Some of her ideas include a statewide heatmap of cases, a search portal for nearby testing sites, and other dashboards to make the app more interactive, like a tab with vaccine development updates and the latest announcements from Gov. Ralph Northam.

Demand has boomed in recent weeks as Thanksgiving nears. Statewide the seven-day average of cases has swelled to a record-breaking 2,403; a month ago, that number was 1,180.

Yet as people rush to clear their consciences ahead of the holiday, health officials warn that a negative result is not enough to guarantee the potentially lethal virus won’t spread to family and friends.

Hala Ayala and Elizabeth Guzmán, two delegates who represent Prince William County, have formally announced a run for lieutenant governor. If successful, Ayala or Guzmán would become the first Latina to serve in the role.

The delegates were among the first Latina representatives elected to the state legislature during the wave of Democratic victories in 2017. Ayala and Guzmán ran for office to provide diversity in state government that more accurately represents the population in Prince William County where a quarter of residents are Latino; almost 25% are Black and nearly 10% are Asian, according to the U.S. Census.

Appalachian Power Company, Virginia’s second largest electric utility serving more than half a million customers in and around Southwest Virginia, will not be allowed to raise its rates for the upcoming three years, regulators decided Tuesday.

The State Corporation Commission also slightly decreased the company’s allowed profit margin, from 9.42 percent to 9.2 percent. Appalachian had argued it should be increased to 9.9 percent.

Carilion Clinic and the Virginia Department of Health are hoping to help answer that question through a $566,000 serology study that will check the blood of 5,250 willing residents.

Dr. Paul Skolnik, chair of Carilion’s Department of Medicine, put out a call for volunteers from 22 localities in Southwest Virginia who are willing to answer a survey and undergo a blood test that looks for antibodies to the coronavirus.

Virginia Scope is an independent news publication that is funded largely by donations and subscribers. As local newsrooms are losing writers each day, we are trying to fill the void to ensure that the public is informed and that leaders are held accountable for their actions. If you can chip in a monthly subscription of whatever you can afford, even $1, it will go a long way to helping us. Subscribe here.