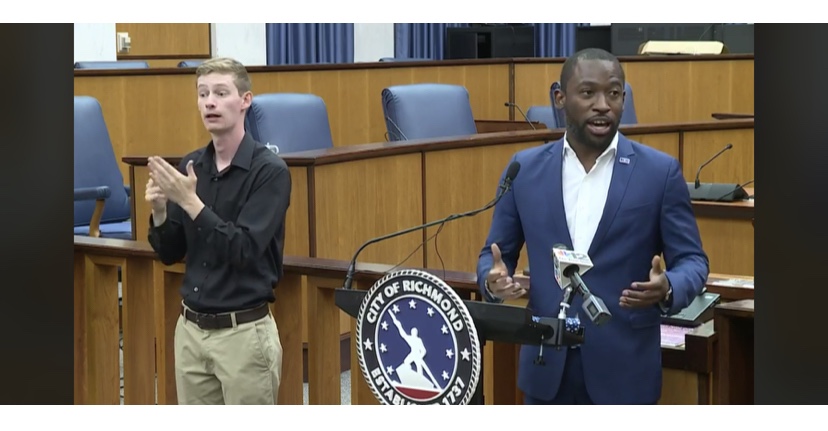 Richmond Mayor Levar Stoney gave a COVID-19 update Monday afternoon. As of Monday morning, Richmond has 2,288 confirmed cases of COVID-19, with 29 deaths. Stoney notes that Richmond has not had any deaths in the last two weeks due to COVID-19.

Stoney said that the numbers are looking manageable at the moment, “We have ourselves to thank for this.” He also reiterated the importance of following the Center for Disease Control’s guidelines for social distancing moving forward. “The pandemic is still very real, COVID-19 is real.”

Dr. Danny Avula, the Director of Richmond and Henrico Health Districts also says that data numbers in Richmond and Virginia have been trending favorably. Although he says, the decrease in numbers has started to plateau in the last 10 days.

The Mayor said that Richmond has been implementing a ‘box-it-in’ strategy that incorporates a combination of testing, tracing, and isolating to keep the virus from spreading.

You can go to RVAstrong.org to find opportunities for free and cheap testing, or what other resources are available if you have the virus.

Avula also noted that new information shows contact spread only accounts for 5%-10% in transmission of COVID-19. He also said indoor settings show transmission rates that are much higher than for outdoor settings.

Stoney also spoke on the eviction crisis that is happening in Richmond as the moratorium stopping evictions ended last week. Sharon Ebert, the city’s deputy chief administrative officer for economic and community development said that there are 1900 eviction filings in Richmond right now.

“Everyone deserves to feel safe and secure,” said Stoney while noting he does not have the power to put a moratorium in place.

The Chief Justice of the Virginia Supreme Court issued the moratorium on eviction proceeds in early June after a request from Governor Ralph Northam due to COVID-19. That expired on June 28th.

Protesters gathered outside of John Marshall Courthouse in Richmond on July 1st as a demonstration against the lifting of the moratorium. The crowd held a peaceful demonstration for hours before someone was detained for sitting at the entrance of the courthouse. As the crowd tried to remain in the doorway to film the incident, deputies used pepper spray to push protesters back from the door so that they could close it.

Ebert said that the majority of the 1900 eviction cases were filed prior to the pandemic, although she did not release specific numbers. She said today that Richmond will be using $1.9 million of the $6 million allotted for eviction relief by helping those residents with their rent.

Stoney advised residents to call (804) 644-2401 to find out if you qualify for rent assistance. He acknowledged that the line is being inundated with inquiries and he urged callers to leave a message so that someone can contact them.

The Richmond Tenants Union, one of the organizers of the July 1st demonstration responded to Stoney’s announcements. “RTU would reiterate that housing is healthcare. No one should be forced to deal with the violence of eviction, especially during a pandemic. We continue to demand that rent be cancelled entirely. The unemployment rate is still sky high and many people simply lack the resources to make rent.

“We would also note that when it came time to remove the monuments, symbols of white supremacy, the mayor didn’t wait for permission and took matters into his own hands. But it appears that when it comes time to deal with the actual manifestations of racism with regard to housing and evictions, suddenly his hands are tied.

“As demonstrated by the Navy Hill debacle we know the mayor is only interested in developers and corporations and not the wellbeing of the people of this city. If tenants want to get a fair shake they need to come together and organize collectively.”

Donate or Subscribe today to help us reach each corner of Virginia to make sure every story is told.